Conclusion of the MOU with Jongno Tourism Council > 공지사항 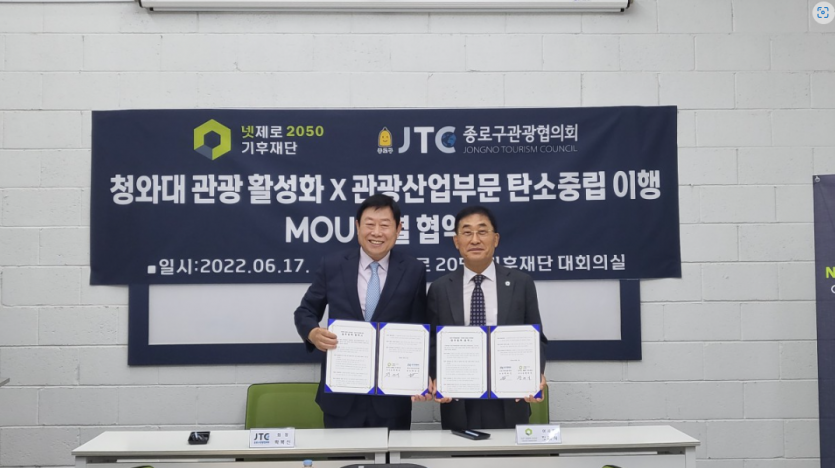 On June 17, the NetZero 2050 Climate Foundation, a non-profit corporation under the Ministry of Foreign Affairs, signed a memorandum of understanding (MOU) with the Jongno-gu Tourism Council to "resolve climate, environmental, and energy issues and establish organic solidarity for carbon neutrality."

Prior to the agreement, Jang Dae-sik, the chairman of the NetZero 2050 Climate Foundation, thanked the guests who attended the event and stressed that efforts for carbon neutrality should be actively implemented in the tourism industry.

In particular, Jongno-gu is a local government that is the center of the Seoul tourism industry and plays an important role such as Cheong Wa Dae tourism, and is expected to play a role and function as an autonomous district leading carbon neutrality. We ask everyone to do their best to develop into a representative model and excellent case for carbon neutrality implementation in the tourism industry."

Park Bok-shin, the chairman of the Jongno-gu Tourism Council said, "Jongno-gu is the local government with the largest tourism resources and floating population in Korea. Recently, the opening of the Blue House has raised expectations for tourism in Jongno-gu, while concerns about traffic jams and waste emissions are also rising. The agreement with the Climate Foundation was confident that it would be an opportunity to come up with specific alternatives and action plans for solving various problems in Jongno-gu, the center of tourism in Korea, and to change the tourism paradigm."

He also expressed expectations that "Cheong Wa Dae tourism will provide an important opportunity for sustainability."

Under this agreement, the two organizations will work closely to establish and implement a standard model for the tourism industry for carbon neutrality and promote a joint campaign to implement carbon neutrality for climate change. Jongno-gu will actively cooperate to fulfill its role as a leading autonomous district in carbon neutrality.